This quilt is brought to you by Netflix. I’ll admit it, some Buffy the Vampire Slayer, which I never watched when it was on the air, but now am pretty much enjoying. I can’t get over their clothes, which are EXACTLY what I wore in high school, and the music is EXACTLY what I listened to. I thought I was being cool and alternative at the time, but apparently I was the target demographic of Buffy. Anyway, it is somewhat gratifying, because I wore the most horrible outfits in high school, and it all makes sense now.

ANYWAY, my veggie star quilt, which has been progressing on this blog here and here is almost done! I just have to bind it, which I am going to machine bind it, so this is not some epic feat of heroism like when many quilters hand-sew their binding.

Here is the back of the backing. I pieced using the majority of my scraps from making this quilt and a few others that have the same vintage fabrics. Matt said, “That’s like a whole other quilt – it’s a reversible quilt!” and I said, “It’s more like an exorcism.” Anyway, call it what you like, it’s done! And here it is, all pinned up and no where to go: And here it is, sewn with free motion quilted stars and swirls. I tried to make the stars look like they were dancing. Not sure exactly that that means, but I had fun doing it. My machine was giving me fits with skipping stitches, which I think was in part due to the cotton thread I was using (Gutermann, which also was linting like crazy!) but when I checked my machine manual, it turns out I was using the wrong Free-motion foot! I needed the little metal one instead of the big clear plastic one. Who knew? That switch and a new needle every hour or sew fixed the problem.

In other triumphs, this finally arrived: My second annual bolt of Kona PFD White. We’ll see how long it takes me to go through it. The price went up $15 from last year, blerg. I should have bought two then! I don’t just use it for dyeing fabric (which is what PFD stands for “Prepared for Dyeing”) but also for my basic white in quilt backs and in piecing.

UPDATE – I bound and washed this quilt. I figure this is as good place to brag as any! It will be for sale on Etsy soon, I think. 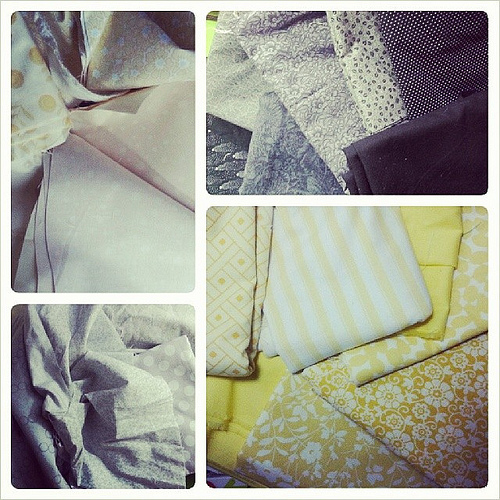 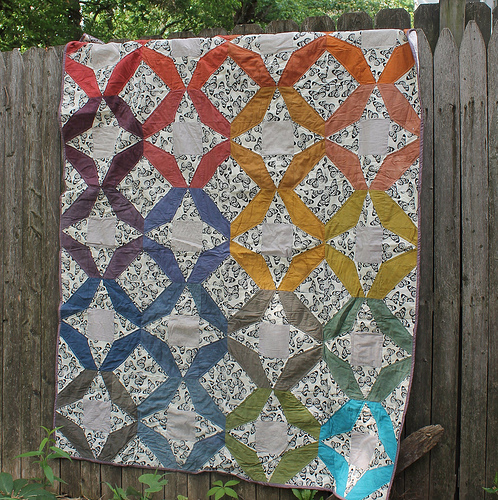 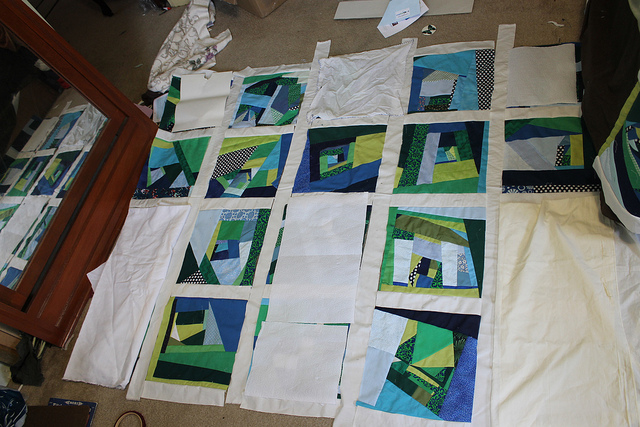