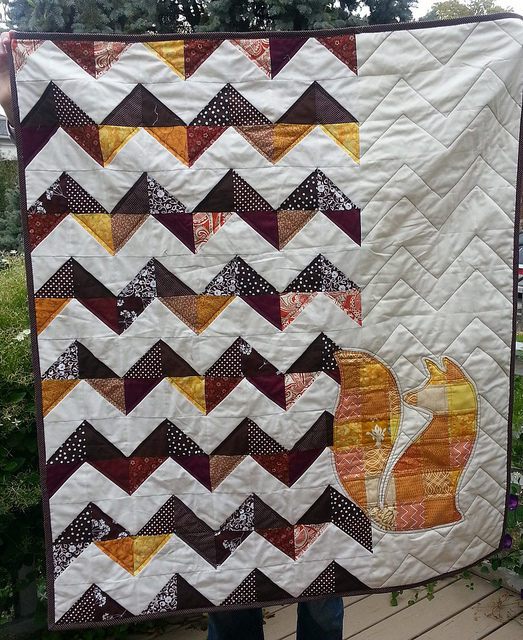 About two years ago, I made a fall snowball quilt, and had a bunch of HST’s leftover after trimming my blocks. So I pieced them into an awkward shaped block of chevrons. It then seemed impossible to me how to finish the quilt.

Then last week I was sorting through some Works in Progress (sooo manyyyy) and in a flash decided I would add a strip of white and an applique patchwork fox. I had a free moment so got started immediately.

And Done! I have traced the applique with basic instructions for anyone that may want to make their own Fox Patchwork Applique here is the pdf . It is a VERY basic pattern, let me know if you have any questions.  The fox finished at about 13×17 at the widest area, so you could easily make one with a fat quarter if you don’t like it pieced. 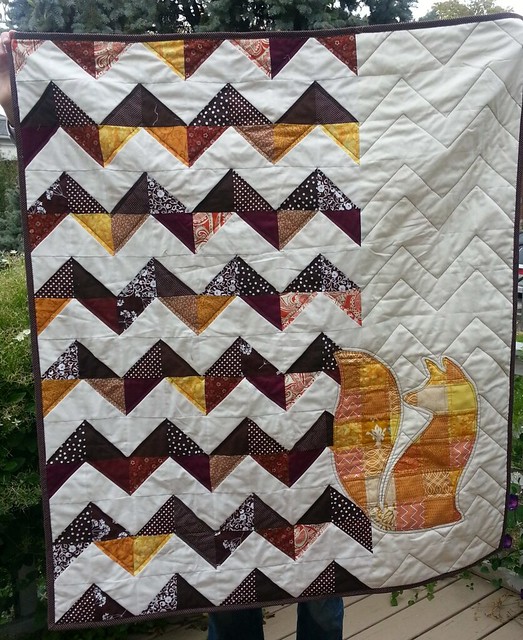 I pieced together a block of orangey-yellow 3″ squares and made a patchwork fox backed with fusible webbing. I pinned the fox down during basting and put on the finishing stitches during the quilting process. 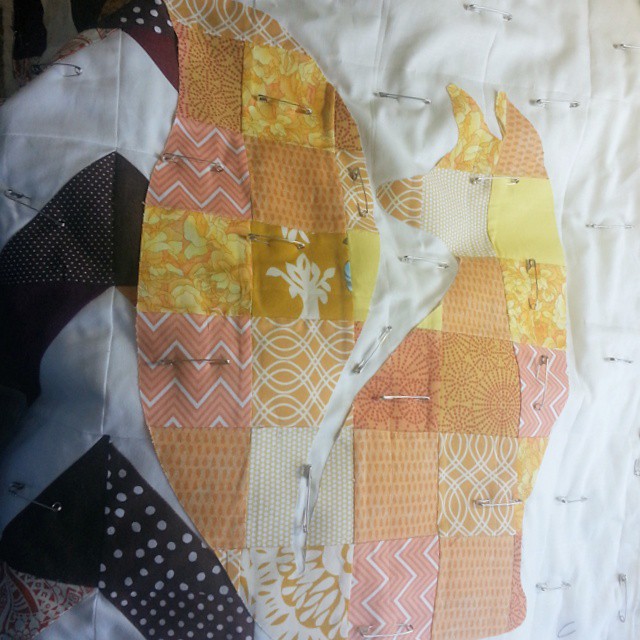 The fox was stitched down during the quilting stage using my walking foot using contrasting brown thread. I could have free motion quilted it, but I was too lazy to change the foot. I felt it needed something more and put a line of stitching around the fox, and then quilted the patchwork using a matching orange thread. I continued the chevron quilting into the negative space. I wanted to do more dense quilting initially and had pulled out some bronze and gold threads to add to it, but now I like it simple. 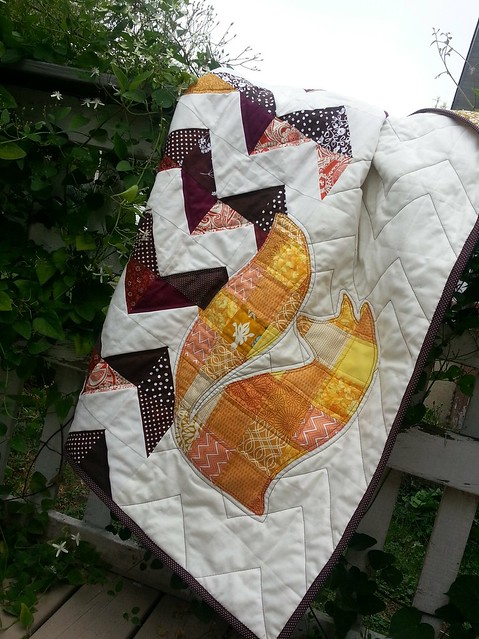 The backing is a mustard-tan print from Joann that I got a long time ago. I really like it and it has a nice solid hand. It makes me sad that there are so many other prints at Joann that are so pretty, but feel too flimsy and cheaply made to quilt with.

I had a mustard-tan thread on hand that matched it flawlessly – you can not see the quilting on the back, even the fairly dense quilting on the fox. I used up every last inch of that thread in this quilt. About 4 inches of binding stitching are done in a tan thread that just barely matches. That may seem like a really boring story to most people, but I think many sewists can understand that special thrill of pulling out that perfect thread for a project and then hoping it’s enough! 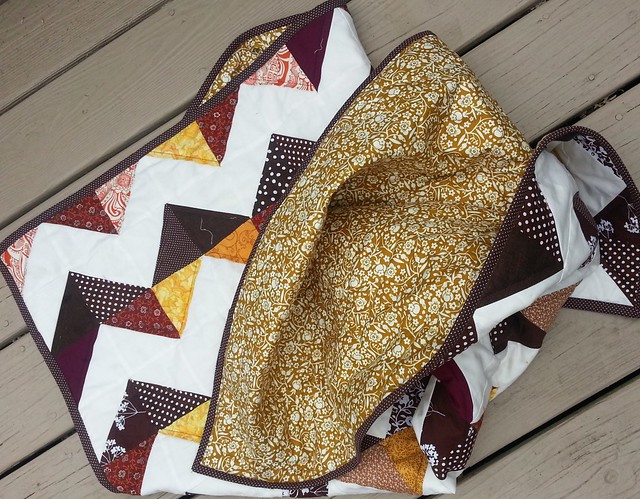 I used 80/20 batting. Can’t remember the brand. I used to love 80/20 batting, but it is too fluffy for my tastes now, I’ve tried several brands and keep coming back to Warm and Natural. But I do like how soft the finished quilt is, and since it is for a baby, that is perfect!

For a fairly spontaneous project, I’m happy with it. I think if I had it to do over, I’d make the fox a little bigger though. Always more fox!

I’m linking up to TGIFF  and Crazy Mom Quilts, because I am pretty dang happy it’s finished! 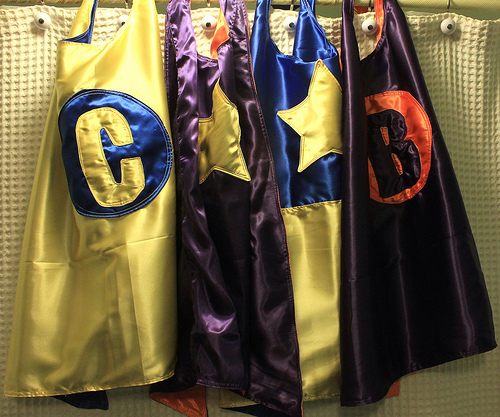 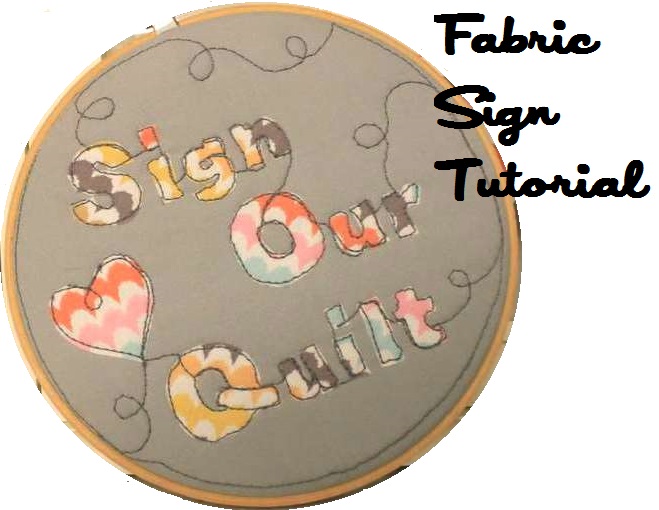 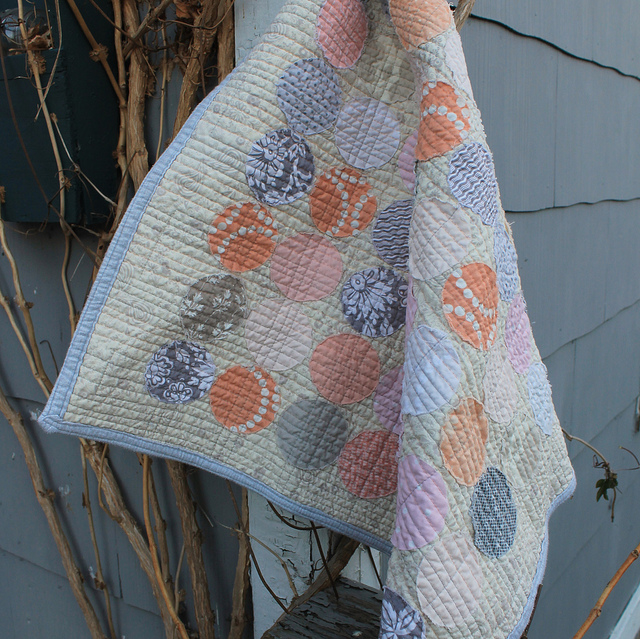