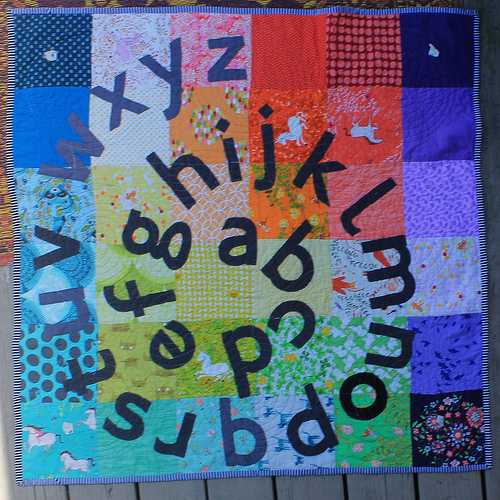 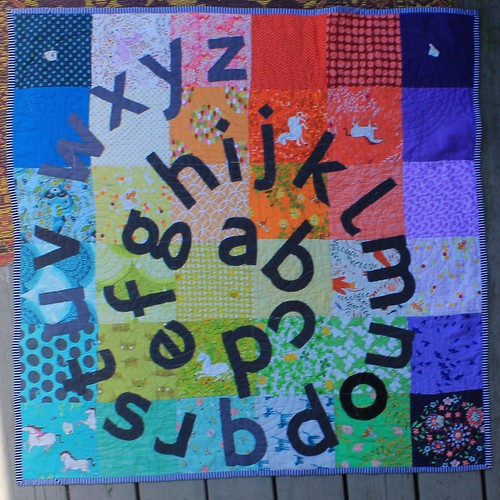 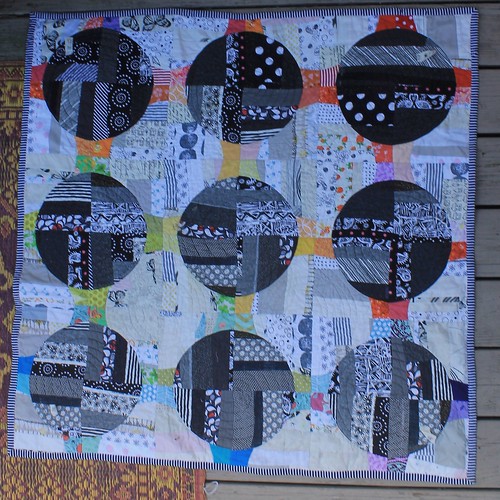 I finished this baby quilt shortly after the baby was born, but never got pictures of it. I used it as a play gym for her until recently, since she is now too grown up for play gyms! I wrote about the play gym process here – it was easy to pull off the arches and transition it into a play mat – perfect for sitting on the front porch and watching the cats.

I wanted the high contrast side to look like layered circles – with the white circles behind the black. and I think if I had used higher contrast fabrics, that effect would have really popped. But as it is, I love the scrappy blended look of it – like sun dappling through the trees. And the baby used it during tummy time and she can now hold her head up, so basically, it is a total success! 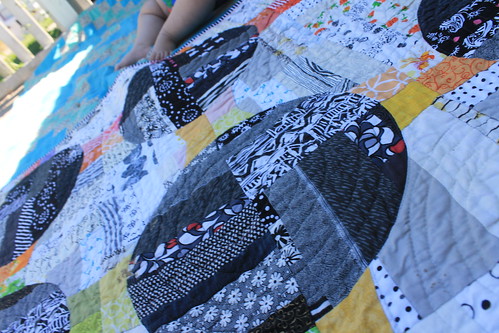 I put an extra layer of cotton batting in the circles, but quilted it all down really flat, so you can’t tell. Oh well. 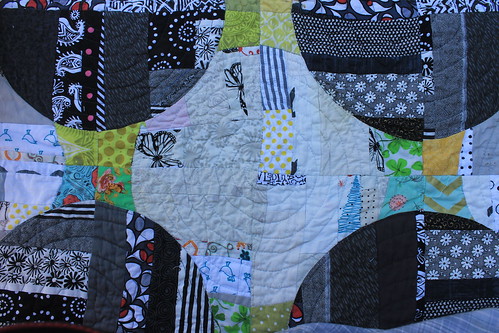 It was fun doing some little fussy cutting for the little colored patches. This quilt has seen some damage and been through the washer many times – just like I planned! 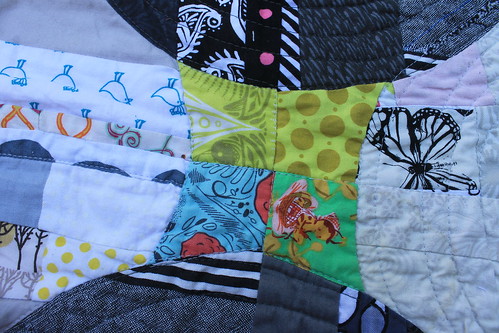 The back is an alphabet swirl on top of rainbow blocks. For as simple as the design is – just a bunch of squares – it took almost as long as the intricately pieced side!

I fussed and fussed over the alphabet placement and originally wanted a letter in each block then numbers to fill out the rest. But I’m much happier with this. I did this lay out when she was a newborn – I would wear her in the carrier and then stand there and move all the pieces around with my foot. Most of the work was in picking the fabric/rainbow placement. Once I had the colors I wanted all set, I made some other rainbow toys, like stacking rings and some fabric blocks. I love these fabrics and these colors together, and when we move into our bigger house, I’ll probably decorate her room with these colors. 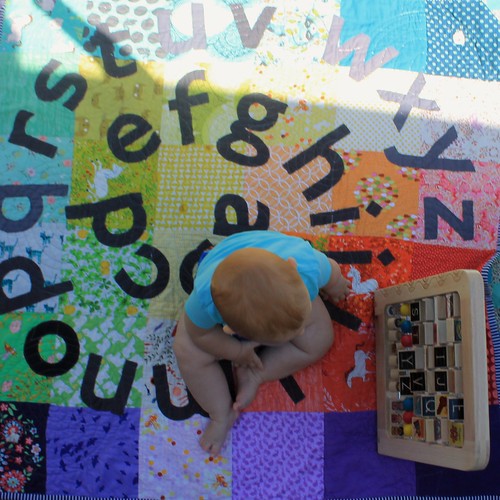 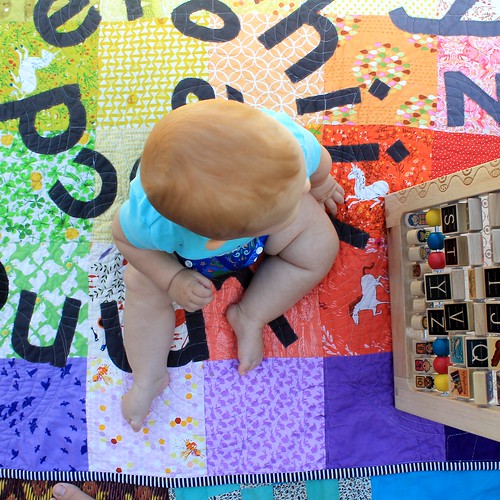 It’s always tricky to figure out a quilting design that works for both sides. In this instance I think the spirals look great – I used a sparkly thread that blends fairly well into all the colors on the rainbow side, with out contrasting too much on the black lettering. 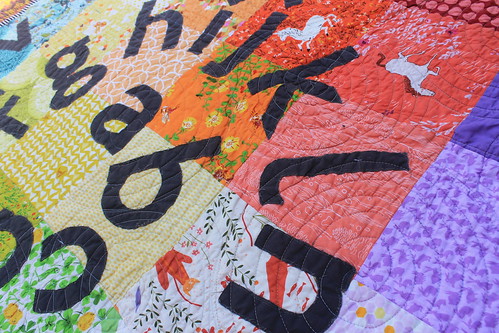 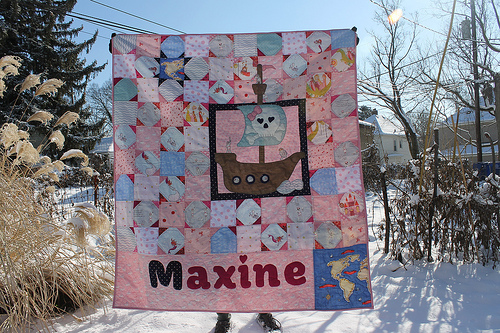 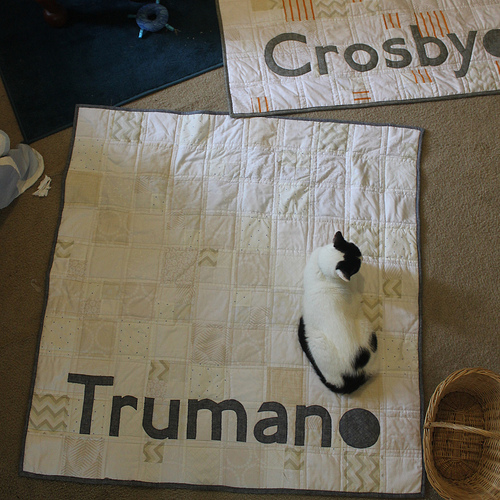 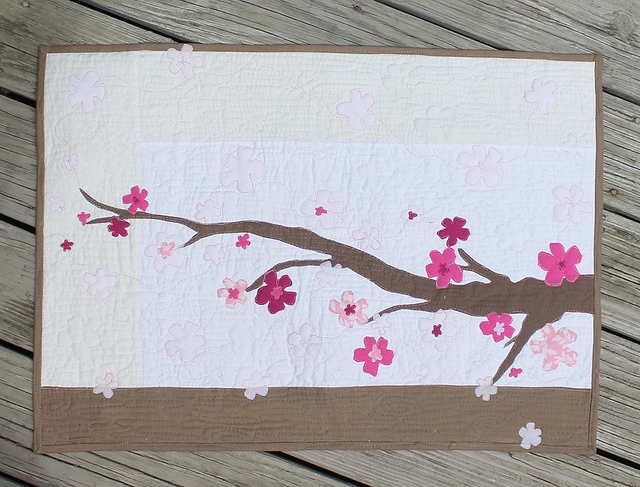